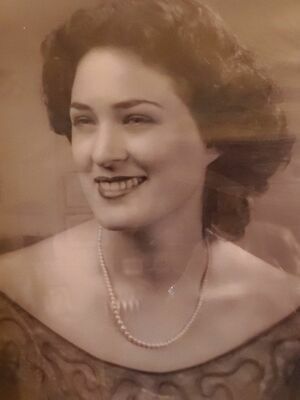 Virginia traveled the world, usually following her husband—as a Navy wife and then as a non-hunting companion for his safaris. She was a devout Christian who took in the word of God daily and guided her family with that wisdom. She was a much beloved daughter, sister, wife, mother, aunt, grandmother, and friend. She will be sorely missed, but her legacy of graciousness will be carried on by her children, grandchildren, and great-grandchildren who all adored her. Assuredly, she will be greeted with, “Well done, thy good and faithful servant” (Matt 25:21).

Her family wishes to extend our sincerest appreciation to the staff of Hospice in the Pines and our gratitude to her wonderful caregiver Brenda Carroll, whose devotion was unmeasurable.

IN MEMORIAM FROM HER GRANDCHILDREN

My grandmother grew up during the Great Depression, and those things she experienced in childhood stayed with her forever. She was a huge fan of the Depression Era phrase, “Use it up; wear it out; make it do, or do without.”

She was one of the fairest people I have ever known. She was a strong Christian, and she tried to view everything in life through that lens. She was always prepared, always fair, and always humble.

One of the lessons that she taught us boys as children was how to build a fire. I know nowadays that is mostly discouraged, but she would not have grandsons that couldn’t accomplish building a basic fire if they were ever in need. To teach this lesson, she gave me, my brother, and my cousin each three matches. She demonstrated how to properly arrange the kindling, how to strike the match, how to protect the small flame from the wind, and finally, how to light the fire. She did this several times until we all said that we understood. Then she said we each had three attempts to get it correct-– the three matches. All of us were able to start the fire within the three tries. That episode taught us a lesson about preparedness, fairness, and humility. We all learned to take care of ourselves a little better that day— we all found out that we didn’t know as much as we thought we did, and we all received equal attempts at the task.

We learned much more over the years from our grandmother that prepared us for life. But I always look back on that particular lesson and find it ironic that she chose to use three matches to teach us that day. Three was a significant number for her; she had three daughters and three grandsons. God gave her three attempts in two separate areas in life with daughters and grandsons, and we think she succeeded every time. She would probably argue that it was anything except her that made us all who we are today because of her humility, but, for once, she would be wrong.

She had a massive impact on all of our lives and most certainly had everything to do with all of our successes. We will always remember her lessons; we will always love her, and we will always miss her. As Paul said to Timothy, “I have fought the good fight, I have finished the race, I have kept the faith” (II Tim 4:7). Nana has done that and inspired us by her example.

She was the epitome of what I always thought a mother and grandmother should be, but she wasn't on the movie screen (although she was that beautiful); she was in our real life. Oatmeal cookies and a fridge full of food that she made for us (everyone's favorites represented) was always accompanied by a sweet hug and a pat on the back at the end, with her words, “The Lord is listening, so don't forget to say your prayers.” There wasn't a smidge of bad in her, and no one could ever convince me otherwise. Pap is happy because he has his sweetheart back now.

Nana was undefeated in Monopoly and dangerous with a fly-swatter. She taught us many things, including how to strike matches and how to negotiate the price of anything. She was also fond of making my brother, my cousin, and me dress up at Christmas as the Three Kings or—to my chagrin—two shepherds and a sheep (I was always the sheep because I am the youngest grandson).

Nana was as close to perfect as a human could get, and all of our lives, we thought Nana was other-worldly because she didn’t have fingerprints or a belly button (she told the children that she kept it in a locked dresser drawer). However, even with her angelic characteristics, Nana was a force to be reckoned with.

In our house, it was easy to deter us from wrongdoings because the standard of conduct was to never do something that “you didn’t want Nana to know.”

We all talked to Nana about every facet of our jobs and the stresses of life, and she would always say how proud she was of us and that the Lord is with us every step of the way.

There will be no services at this time. The family gratefully requests that memorials be donated to Hospice in the Pines, 1504 W. Frank Ave., Lufkin, TX 75904 or Berachah Church, 2815 Sage Road, Houston, TX 77056, or the charity of your choice.