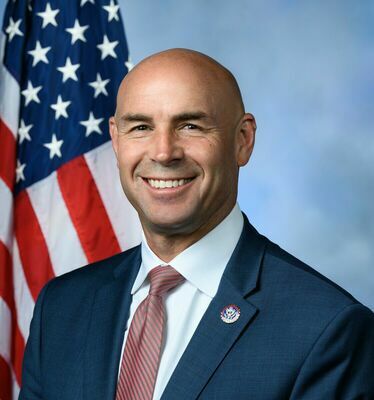 Veteran Navy Commander Jake Ellzey has worn a number of different hats, and come November 2022, Cherokee County residents will know him best as the incumbent Republican candidate seeking to remain seated as the representative for Texas 6th Congressional District.

But talk to him one-on-one, he immediately assures others that he’s “just Jake.”

The Ellis County resident served as a Navy fighter pilot, completing his service as the Air Boss on the USS Ronald Reagan aircraft carrier, deployed multiple times, including to the Middle East, according to a biography.

In 2020, Ellzey won a special run-off election for Texas District 6 which, thanks to redistricting, will include Cherokee County come January 2023.

“Currently, the district includes part of Tarrant, and all of Ellis and Navarro counties, but after redistricting, there will be eight counties in the TX-6 district: Ellis, Tarrant, Navarro, Johnson, Freestone, Anderson, Cherokee and a little of Dallas,” he explained.

Having grown up in the Texas Panhandle in a farming and ranching community, Ellzey said he was excited about representing the redistricted TX-6 area.

“I was a farmer and rancher, from a farm and ranch family. I don’t exactly know what the new demographic of the district is (at this time), but I’m glad to have it,” he said, noting that all the counties in the redistricted area have in common certain needs that he is interested in championing.
“I’m pro-broadband, pro-improving access to water, pro-groundwater rights and anti-high-speed rail,” Ellzey said. “And these are something all these counties are interested in.”

As a military veteran appointed to serve on the Texas Veterans Commission following his Navy retirement, Ellzey called veteran issues “very near and dear to me.”

“Especially helping out veterans in rural areas, where they tend to retire in great numbers, (but are) an inordinate distance from care – I’m always interested in helping them,” he said. “(Veteran care) is a federal function and we need to take it very, very seriously – I’m always looking for new ways to help.”

The Congressman said he hopes to be able “to provide good constituent services” through in person visits and townhall meetings – cyber and in-person – “to a degree that I have so many of them, that people finally start saying, ‘Okay, I’ve been heard,’” he said.

Describing himself as a team player, Ellzey noted that as 20-year military veteran, “I’m used to working to accomplish a mission with a team of good people, and that’s my goal.”