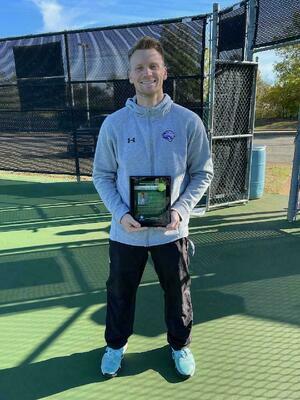 The plaque is on public display at Legends Old Time Burger Café, 1630 S. Broadway in Jacksonville.

Becker’s plaque notes that he “has been a tennis standout from the first days he learned to play the sport. He quickly earned state and national ranking as a junior player. After completing high school, he graduat-ed from the Tyler Junior college Tennis Tech program as a certified teaching pro,” according to a JTA release.

“As he earned his college degrees, he became the head tennis pro at tennis clubs in East Texas and New Jersey. He became the highest rated tennis league player from Jacksonville in the history of the JTA. He has also helped develop local tennis players to become champions,” the release stated.

“As coach of the Jacksonville College tennis teams, he has quickly led them to top ten national rankings. In 2021, he was honored as the National Junior College Coach of the Year by the Intercollegiate Tennis Association. Jonathan is universally respected and well-liked by all who personally know him, on and off the court,” according to the release. “His lifetime achievements and pleasant manner have brought great credit and acclaim to his family, the JTA, and the city where he lives; for which he has been inducted into the JTA Hall of Fame.”

Pet of the Week – Lily