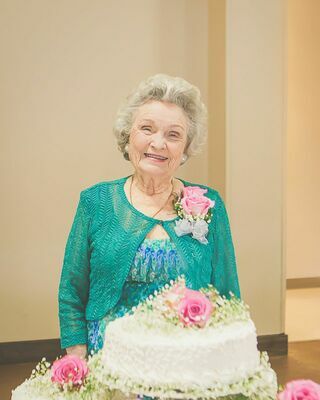 Sylvia “Sue” Cole Bacon, age 96, passed away peacefully at her home in Newton, Texas on November 14, 2021. She was the only child of Howard Richard Cole and Irma Sue Holcomb Cole, and was born May 29, 1925 in Alto, Texas at the Holcomb family homestead. Her family moved to Jasper, Texas when she was a young child, where she was called “Sue Baby,” her father’s endearment for her, by adults and friends alike. She was the drum major of the Jasper High School Marching band, and was named the “Most Beautiful Drum Major in Southeast Texas” in 1941. She graduated from Jasper High School in May 1942 at the age of 16. After graduation from Tyler Business School in May of 1943, she enrolled at the University of Texas in Austin in the fall of 1943.

It was on a train trip back to UT after Thanksgiving that Sue met the love of her life, O’Neal Bacon. They were married for 65 years and were blessed with four children. She was devoted to her family – her pride and joy - and to her church, First United Methodist in Newton. Sue loved beautiful things, like flowers and art, and especially enjoyed traveling, whether it be to away games to cheer on her beloved Newton Eagles or to far-flung national parks. She and O’Neal put thousands of miles on several recreation vehicles. Through their travels with family they visited the 48 contiguous states and visited Hawaii for their 50th wedding anniversary.

When her children were growing up in Newton she served on the PTA, lead Cub and Girl Scout troops, taught Sunday School and Vacation Bible School, designed homecoming floats and attended every game, performance or event her children were involved in. Later she would devote energy to teaching exercise classes at church, to gardening, and serving as the “money lady” for the Powell Hotel soup days. Her children and grandchildren treasure her beautiful paintings, though she always modestly denied her skills as an artist. She enjoyed meals at the Senior Center and especially the fellowship of her “Wednesday Night” group. And if you were ever the recipient of her “Meme bread or cinnamon rolls” you were in for a treat!

Sue’s positive energy was an inspiration to her family and friends. And her infectious smile was graciously offered to all she met. She was affectionately called “MeMe” by her eight grandchildren and 6 great-grandchildren.

Preceding her in death along with her parents was her husband Judge O’Neal Bacon.

The family would like to thank her care-givers— Evelyn Vincent, Annie Isom, Becky Williams, Dalayna Cooper, and Katherine Moss. Sue called them “my friends” but our family knows that especially in these last few months they were “our Angels”.

Visitation will be at the First United Methodist Church in Newton on Thursday, November 18 at Noon with the funeral service following at 2 pm. Interment at the Newton City Cemetery.

With respect for the living please wear a mask and follow covid protocols.