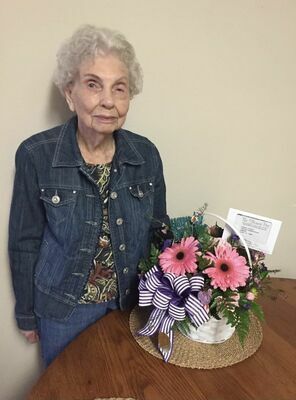 Mary Frances Johnson, 95, of Lufkin, and formerly of Alto, passed away Thursday, October 28,2021 in Lufkin, Texas.

Funeral services will be Wednesday November 3, 2021 at 2 p.m. at Keltys UMC, 1867 Old Mill Road in Lufkin, Texas, 75904. A visitation will be held prior to services at the church. A graveside service will be held the same day at approximately 4 p.m. at the Alto City Cemetery.

She was born April 22, 1926 in Alto, Texas to Wylie Sydney and Willie Allene Sartain Reed. She began playing the piano at Cold Springs Church in Alto at age 10 and she was baptized in a stock pond. She played the organ at A. Frank Smith UMC in Alto from 1967 to 1984. She was President of the Methodist Women for two different terms. She always tried to fill in anywhere she was needed at the church. More recently she was a member of Kelty’s UMC in Lufkin.

She is preceded in death by her parents and by her husband Richard M. Johnson to whom she was married for almost 60 years. She is also preceded in death by sister Alta Petrey and an infant son. She is survived by son and daughter-in-law Richard Ray and Janet Johnson; daughters and sons-in-law Myra and Rayford Smith; and Darlene and Jeffrey Fatheree; as well as 7 grandchildren; 6 great grandchildren and numerous nieces, nephews, and friends.