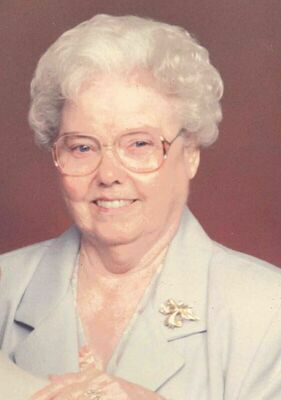 Services for Alice Elizabeth Robinson, 97, of Newark, Texas will be Saturday, October 23 at 2:00 PM at Hudson & Torres Family Funeral Home in Bridgeport, Texas, officiated by Pastor Ford McElroy. Burial will follow in Chico Cemetery in Chico, Texas. Alice passed away in Decatur, Texas on October 17, 2021.

Alice met Jerry Robinson at a barn dance in Decatur. The couple married December 5, 1947, in Dallas, Texas and were married 63 years, before his death on January 2, 2011.

A lifelong seamstress and lover of fabric, Alice made all her children’s clothes and also was an avid quilter. She was part of a quilting club in Wise County. Over the years, Alice won multiple quilting awards all over the states of Texas and Oklahoma.

She was a member of the First United Methodist Church in Rhome, Texas.

Alice was preceded in death by her parents, husband Gerald ‘Jerry’ Robinson, and brother Gerald Vining.