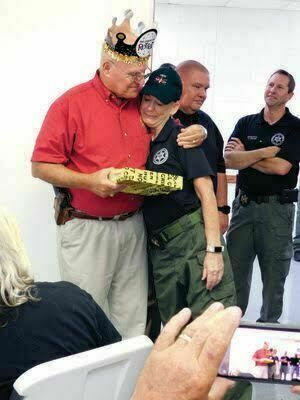 The year 2020 packed a wallop across the globe, as a world-wide COVID-19 pandemic was declared, but even related issues and concerns didn't stop progress as businesses in the county renovated or launched.

We said goodbye to the longest-working Cherokee County sheriff, and hello to his successor, as well as to new police chiefs in Jacksonville, Rusk and Alto.

Meanwhile, investigations continue into separate missing person cases involving a teen and an infant, while arrests were made in the fatal stabbing of a Jacksonville man.

Below are The Cherokeean Herald's top five stories for 2020:

When a viral pandemic was declared in early March, little did U.S. citizens realize just how great of an impact the novel coronavirus – better known as COVID-19 – would have on their lives.

In Cherokee County, public school students, excited about the arrival of Spring Break, found themselves at home longer than expected, then finishing out the school year as remote-learning students.

State leaders called for closure of government and public facilities, along with a variety of businesses – some which eventually closed due to economic woes wrought by closure – and churches, who turned to video streaming to air services. By mid-May, the state began re-opening in stages, and school leaders aimed for a traditional school-year beginning – including sports – albeit in a remote-learning environment. By mid-semester, a majority of students were back on campus, for which districts incorporated strict COVID-19 protocols to help “keep the curve down.”

In 2020, many communities opted to cancel events that normally drew crowds, such as the Junior Livestock show, annual Tomato Fest and the Tops in Texas Rodeo in Jacksonville and fall festivals throughout Cherokee County.

In December, however, relief arrived the form of vaccines delivered in East Texas mid-month to UT Health and Science Center, with 1,500 set aside for Cherokee County; at the end of the year, Lufkin-based Brookshire Brothers Pharmacies announced they would provide vaccinations to employees of clinics and hospitals, as well as those working in doctor, dental and home health offices.

While 2020 will primarily be known as the year the country was shuttered, surprisingly – yet happily – the pandemic did not impact business construction or renovation in Cherokee County.

In Rusk, work began in the fall on a Cline Clinic $3 million project that will bring a new medical clinic, retail office space and housing to the area, while at the nearby Rusk State Hospital campus, work commenced on a $200 million project for a modern 227,000 square-foot patient complex and replacement for the administration building. Meanwhile, an unoccupied building in downtown Rusk was razed after it collapsed unexpectedly, and the local Harry’s Building Supply company – damaged by flooding in 2019 – is in the process of being rebuilt.

In neighboring Jacksonville, a public safety complex project launched for a facility that will house the city's police, fire and emergency services, while a new Dollar General store will be opening soon on U.S. Highway 79 and construction began on a new Chick-fil-A restaurant.

The new eatery is located at the site of the former Jacksonville Public Library, which is moving into the Norman Activity Center, renovated with funds from sale of its property.

Alto ISD began construction on a new high school facility, which was destroyed by a 2019 tornado, and Tractor Supply Co. broke ground for a new store just south of town.

Meanwhile, the Cherokee County Airport was the recipient of $1.8 million in state funding, which is being used for a new taxiway that will meet federal standards.

Long-time Cherokee County Sheriff James Campbell, who initially was slated to retire at the end of 2020, announced that he would move his retirement date to Aug. 30. He served 26 1/2 years in that position – the longest serving sheriff in Cherokee County’s history – after a 27-year career as a DPS trooper. Between the two assignments, he served briefly as Rusk City Manager before his appointment to the sheriff's position.

Brent Dickson, his successor, was sworn into office Sept. 1. Dickson rose through the ranks with the department, working as a jailer, patrol corporal, K-9 interdiction deputy, SWAT team leader and narcotic investigator in the Criminal Investigation Division. He also did a two-year stint with the Jacksonville Fire Department.

Meanwhile, three Cherokee County municipalities said hello to new police chiefs in 2020: Joe Williams was named head of the Jacksonville Police Department in January, having served as chief of the Rusk department. He was succeeded by Stephen Hughes as head of the Rusk force, who served as interim chief from the beginning of the year through May. Hughes was part of the department, moving through the ranks before being hired as chief.

In the fall, the City of Alto followed suit, naming one of its own to head the local force: Chief Joe Houghton was sworn into office Sept. 28. He began as an Alto patrol officer in December 2014; he also has worked for the state prison system. Houghton succeeds Jeremy Jackson, who went to work for CCSO.

Law enforcement agencies continue their search for two missing persons at the center of separate cases that occurred in 2020.

In August, Jacksonville resident Tyress Gipson, 18, was reported missing by his family, who said he was last seen Aug. 22, wearing a white T-shirt, black jeans and white shoes in Jacksonville. In early September, four individuals – including a 16-year-old juvenile – were arrested for the aggravated kidnapping of Gipson.

The investigation remains open, and information regarding the case may reported to the Jacksonville Police Department, 903-586-2549.

Approximately a month later, in September, a separate investigation involving a newborn baby was launched when one-month-old Armaidre Argumon was reported missing Sept. 18 from a Wells residence. In a subsequent press conference, Sheriff Dickson requested the public’s help in finding the infant – a Black male child with black hair and brown eyes, weighing approximately nine pounds – who was believed to be in grave or immediate danger.

He was last seen at a residence in the 500 block of Old Forest Road in Wells, clothed in a diaper and in the company of his father, Deandre Argumon.

The incident on July 31 resulted in the death of 25-year-old Jacksonville resident Randy Davenport, who had received a ride from the men when they stopped their vehicle at the corner of County Roads 3901 and 3906 and intentionally committed the act of murder, according to a sheriff’s report.