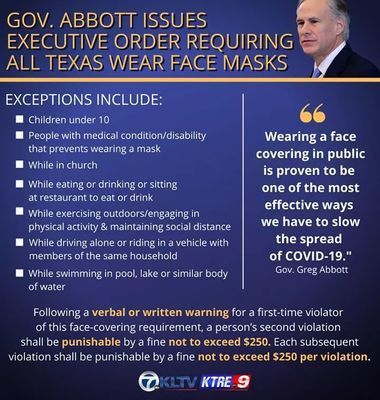 (July 8, 2020) In a move that proved to be rather unpopular with quite a few citizens in Cherokee County, Governor Greg Abbott on Thursday, July 2, issued an executive order requiring all Texans to wear a face covering over the nose and mouth in public spaces in counties with 20 or more positive Coronavirus (COVID-19) cases, with some exemptions.

As of Tuesday, July 7, Cherokee County officials have reported 164 active cases of COVID-19 across the county. The Cherokee County Public Health Department reports nine cases in Alto; 16 in Bullard; four in Cuney; 140 in Jacksonville; nine in New Summerfield; five in Reklaw; 42 in Rusk -- 17 at the Rusk State Hospital and two at a TDCJ unit; four in Troup; and two in Wells. Total confirmed cases reported since March, when the virus reached Cherokee County, is 250; 84 patients have recovered and two have died.

Numerous area residents shared their displeasure at the governor’s order via social media. County resident Chris Snider pointed out in a post, “If it was about the virus, there wouldn’t be exemptions....Good luck enforcing this one. #iwillnotcomply.”

Abbott’s mask mandate also allows law enforcement to fine people who choose not to wear masks in public up to $250 for noncompliance.
“So he’s going to force us to wear a mask in public,” Rusk resident Jason Ford posted. “What’s going to happen if we don’t -- they going to fine us for something that is unconstitutional? I see class action lawsuits in the future.”

Despite citizens’ disgruntlement, many businesses in across the county are requiring masks be worn inside their establishments. Some local law enforcement officials have reported while their respective departments may not be inclined to issued citations for not wearing masks in public, businesses are well within their rights to refuse service and even entry into a store to those without masks.

“Rusk PD officers will not actively search out offenders that are not wearing a mask and following the governor’s mandate,” Rusk Police Chief Stephen Hughes said. “However, if a business has a sign posted requiring customers to wear a mask, and a patron is refusing to wear the mask and/or leave, the officers will assist the business owner.”

Jacksonville Mayor Randy Gorham told a Tyler television news outlet on July 2, “This is a hot topic here. Some people think it (the order to wear masks) is very important. Some people think it’s an overreach of the government from the state. But the governor’s the governor so the city of Jacksonville is going to play by the rules. The city manager met with our department heads already and we’re going to fully comply with the order and do the best we can to implement that.”

Law enforcement entities adjacent to Cherokee County have reported they will not issue citations for failure to comply with the mask mandate, include Smith and Nacogdoches counties’ sheriff’s departments.

The Cherokee County Sheriff’s Office had not made a statement on its stance on the matter as of the paper’s deadline, on Tuesday, July 7.