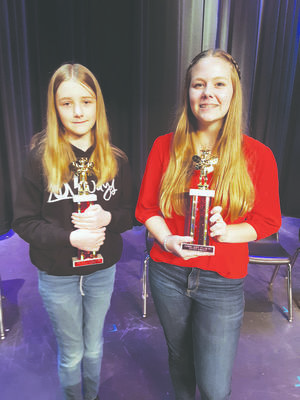 Photo by Cristin Parker
Elizabeth Arrington, right and Kaylie Martin show off their trophies after participating in the 2020 County Spelling Bee.

Competition was fierce as Arrington battled it out with runners-up, Alto Middle School eighth grader Kaylie Martin and Jacksonville’s Danny Ramirez, a seventh grader. Arrington won on the word “calzone” after Martin missed “kangaroo”. Arrington’s win takes her to the next level to compete in Dallas in March. Winners there will get the chance to travel to Maryland to compete in the Scribb’s National spelling bee in May.

“It was a lot of fun,” Arrington said of her participation in the bee. “I didn’t really want to win, because going to the next level seems pretty tough. I still did my best, though and I’m glad of that.”

Her dad Robbie and grandparents were there, cheering her on.

“We’re just so proud of her,” mom Jonell Arrington said.

While Arrington’s no novice to the bee -- her brother placed second two years in a row when he was of competing age -- Martin said this was her first time to compete.

“One of my teachers talked me into participating,” Martin said. “I’m glad I did – it was a lot of fun.”

The national spelling bee began in 1925 when nine newspapers joined together to host a bee, according to the bee’s website, spellingbee.com