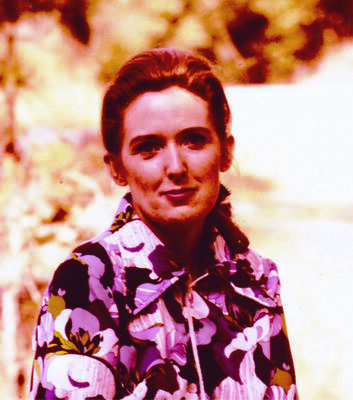 Carol graduated from Jacksonville High School as a member of the National Honor Society. Next she attended Lon Morris Junior College and spent two semesters at Tyler Business College.

An excellent secretary, Carol worked at the headquarters of 3 Beall Brothers department stores for Ray Beall. She found time to be the leader of a Brownie troop. She also joined Beta Sigma Phi International and served as its president several times. In the early 1960s she was a secretary at SK Church Furniture. And she did this while raising three daughters.

Carol’s work at SK Church Furniture led to a surprising trip to New York City where she was a contestant on TV’s What’s My Line. The panelists guessed Carol’s occupation as a collection plate saleswoman.

In 1980, her husband Jimmy’s work with Brown & Root took them to Pascagoula, Mississippi, where these Jacksonville natives dined on the fresh Gulf seafood and weathered their first hurricane.

Always creative, she was known for her decorating taste. She lived by the William Morris quote, “Have nothing in your house that you do not know to be useful, or believe to be beautiful.” She was also an excellent seamstress and made curtains, clothes, and her daughters’ costumes and formal dresses. Forever a lady, she had a lovely voice, a sharp wit, a keen interest in history, and an extensive vocabulary. Her living room library is filled with books she treasured. She delighted in reading, music, painting in oils, and she adored old classic movies.

Carol had a passion for birding and nature. A favorite pastime was riding with Jimmy on country drives among the lush greenery of East Texas and especially in the fall, when the trees were changing colors. She enjoyed target practice with her pistol, too.

Her loving and devoted husband Jimmy Harold Staton of Jacksonville survives her. Their June 30, 1975 marriage has been celebrated for 46 years.

Private services are under the direction of Autry Funeral Home, Jacksonville.