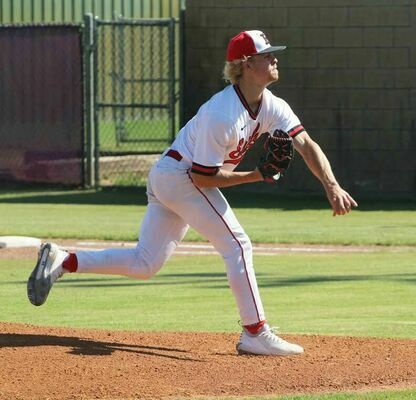 JD Thompson follows through on a pitch during Game 1 of Rusk's bi-district series against Waco La Vega on May 7 in Buffalo. The Eagles won the opener, 15-1, with Thompson, a Vanderbilt commit, getting the win on the mound. Rusk went on to win Game 2, 8-0, with Mason Cirkel shutting out the Pirates. Thompson stroked three doubles in the opener and Wade Williams added a double and two singles. In Game 2, Lane Gilchrest led the Eagles at the dish by doubling twice and stroking a base hit. Rusk advances to the Area round where they will face LaGrange in a Class 4A, Region III Area series. Game 1 will be played at 5 p.m. Thursday, May 13, and the second contest is scheduled for 7:30 p.m. on Friday, May 14. Both of those contests will be played at Navasota High School. If a Game 3 is necessary, it will start at 3 p.m. on Saturday, May 15, at Mumford High School. Rusk will carry a 22-7 record into the series.