The Editor – To bee or not to bee: Creating pollinator havens at home 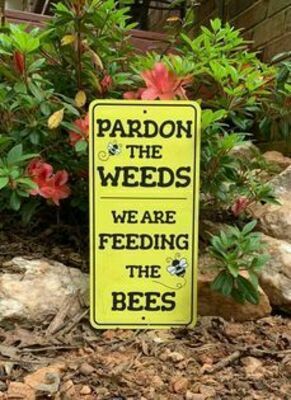 In recent weeks, my social media page has been ripe with photos of bluebonnets and other wildflowers, creating not only eye-candy for readers, but food for bees and other pollinators which ultimately help keep life going.

“Bees are vital for the preservation of ecological balance and biodiversity in nature,” according to www.worldbeeday.org. “They provide one of the most recognizable ecosystem services, i.e. pollination, which is what makes food production possible.”

“Honey bees provide pollination services that uphold $16 billion in U.S. agricultural crops,” states “Honey Bee Nutrition Might Be Key to Healthy Colonies,” published by “Texas A&M Today” in Sept. 2020, which notes that “managed colonies have seen annual declines,” with a 40 percent decline reported as recently as 2018-19.

Meanwhile, at the grassroots level, folks like Dennis Kenney and Deborah Kai are doing their best to help the tiny insect.

His goal is to raise awareness of the role of the honey bee and the need to protect its declining population – “One out of every third bite of food comes from our pollinators, and most of that comes from honeybees,” he said.

Rusk resident Deborah Kai is using her property as a pollinator haven by letting the wildflowers take over.

“I really love the look of wildflowers, as well as knowing that it’s good for the environment,” she said. “I would really like to see (her property) as a yard, not as a lawn, and I’m really hoping to xeriscape it eventually.”

She and her husband moved full-time to Rusk just before the pandemic hit last year, growing out her front lawn to help feed pollinators, then, too.

She’s not sure what happened between now and then, but this year, someone complained to the local police department about her yard, which appeared to have violated a city ordinance that forbids weeds or grass over 12 inches in height.

“I was just really surprised,” Kai said. “We did it last year and no one complained.”

A social media post drew nearly 600 comments, primarily in strong support of the pollinator habitat on her 4th Street property (“I was really grateful for all the support from the community,” she said; “it’s been wonderful”).

And a visit from a city official who responded to the initial complaint went smoothly, she said.

“I told him that I was letting wildflowers grow for the bees, especially after the horrible winter we had (and) he seemed to appreciate that,” she recalled.

According to Rusk City Manager Amanda Hill, “it is not uncommon to receive 3-4 complaints per week during the summer from citizens that keep their yards manicured and expect the same from their neighbors.”

Kai, however, “is the first to contact the city about (the variance, but) our ordinance allows for flowers – pollinator haven – to be placed in landscaped areas, flowerbeds, etc., so it isn’t a case of one or the other. There is no height restriction on flowers that are in these designated landscaped areas.”

Still, Kai hopes to change the Rusk ordinance by seeking a variance that allows exceptions for whole-yard pollinator projects like hers each spring, so that the bees and other pollinators have the sustenance they need to do their part in keeping our ecosystem in check.

If you live inside city limits, be sure to check local ordinance regarding lawns or property, and allowed height of vegetation.