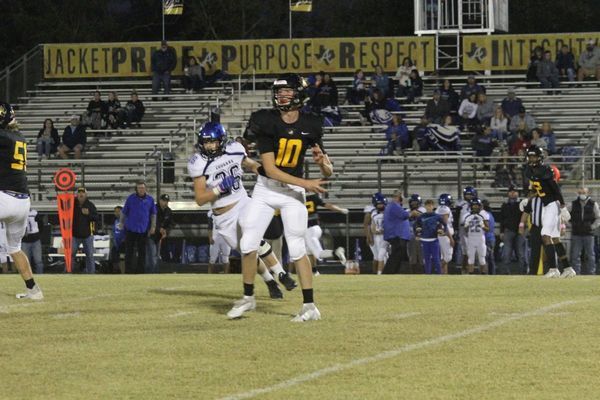 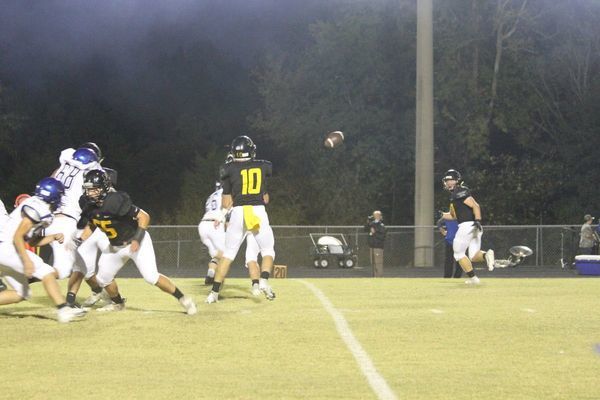 Eagles Clayton Gresham (#55), Landon Cook (#10) and Jackson Duplichain (#21) execute a play with precision during a match against the Madisonville Mustangs 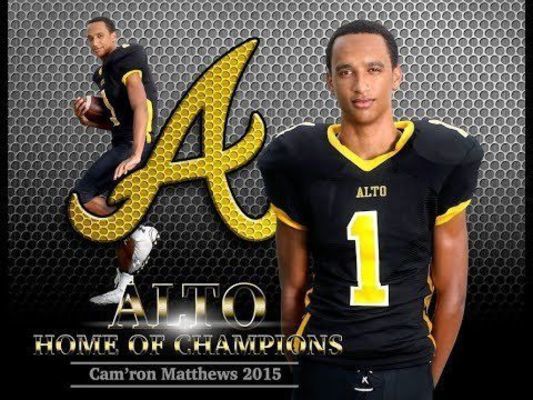 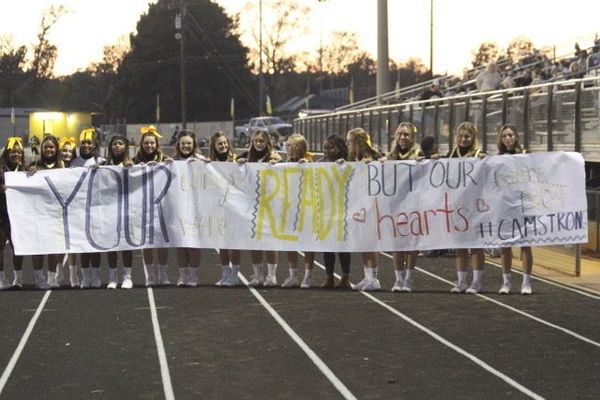 Alto residents honored the late Cam’Ron Matthews, who died Oct. 16, 2015, after collapsing on-field during the game. Along with a moment of silence, the tribute included wreaths, a displayed jersey and his number – #1 – chalked onto the field. Photos by Beverly Milner
Previous Next

ALTO – Friday night's showdown in Alto against Jewitt Leon was unlike any other Friday night football game, as the district paid tribute to Cam’ron Matthews, who died following an on-field collapse during an Oct. 16, 2015, game.

Several displays were visible on field in remembrance of Matthews, a 16-year-old junior starting safety and receiver for the team.

“I was surprised,” said his mother, Gayla Matthews. “They displayed his jersey, with a sash around it, had a floral display, and during the prayer, there was a moment of silence. I felt very honored.”

“It felt good that we have a school family that cares about us,” she added.

Alto ISD Superintendent Kelly West recalled the youth, whom she considers “a great student, a role model to his peers, and a Christian by example to all who knew him.”

“As the fifth anniversary of Cam’ron’s untimely death on the field of the game he loved, it was only natural that Alto ISD would remember a young man who gave so much in his short time on Earth,” West said. “It is fitting that we honored our beloved Yellowjacket, who made the courageous decision to give the gift of life to others in need.

“Cam gave the ultimate gift and forever changed the lives of six people. In the process, he showed the world how one young man can inspire thousands by living a life for others,” she added. “Our community will never forget him or his legacy of helping others.”

In order to win this game, the Yellowjackets would need to come out firing with a lot of energy, said Coach Brock Grigsby.

“We’ve got to establish a running game early on,” he said. “They are a great team. We'll have to get in an offensive rhythm.”

During the beginning of the season, #12 Will Dixon had been the ‘Jacket quarterback, but for the Oct. 16 game, Alto coaches started sophomore quarterback Landon Cook (#10) for his first offensive action of the 2020 football season.

The first quarter was full of roller coaster rides with both teams going back and forth, and neither scoring.

The opening play of the game was a handoff to #21 Jackson Duplichain for three yards. Cook's first offensive yards of the season came on a quarterback draw play with a gain of 5, with a third-and-two coming up. The Yellowjackets would eventually fumble the ball, with 9:57 to go in the first, where Leon would take on at the 44 yard line.

Leon’s first snap of the game made it seem as if a dragon had blown a dungeon away; however, Cook sacked their quarterback, and the Cougars would be forced to punt after a three-and-out.

The first play off the turnover on downs turned into a touchdown, with a tremendous throw from the senior quarterback #12 Jacob Robinson of Leon, followed by a two-point conversion that gave them an 8-0 lead. The Cougars would eventually strike again after their passing yard leader in the district connected on a 24-yard pass, to give them a 16-0 lead after a two-point conversion. The Cougars also would recover an onside kick on the ’Jacket 36, but were not be able to capitalize from it due to the great wall of the Yellowjackets defense.

The half ended with a score of 16-0, with Leon leading.

The third quarter was full of defensive stands, while neither team came up with any points. It ended with an amazing spiraling punt from the Yellowjacket's Dixon.

The final quarter sparked like a set of fireworks: Leon had the ball on the 41-yard line when a costly holding penalty would give them an automatic first down. The next play would turn into an eight-yard touchdown pass to push the lead to 24-0 with 10:36 left.

By 6:38, Alto forced Leon to punt, with the ball on the 38-yard line. Shortly after, the Yellowjackets had a muffed snap, turning the ball over at the 6:25 mark.

With time left to come back, the defense needed a stop badly, receiving just what they needed as Logan Rogers (#13) intercepted the ball on the Yellowjackets’ own two-yard line with 4:52 left to prevent the Cougars from scoring.

On the interception, a face mask penalty was called, giving the Yellowjackets an extra 15 yards. The next play also was a face mask penalty, helping move the Yellowjackets down the field. With 3:53 to go, an intended pass for Pope would be picked up and returned for 31 yards after being ruled a backwards lateral pass. The score was 30-8 Leon after a failed two-point conversion.

With their last hopes of the game still alive, the Yellowjackets started out at the 45-yard line with 3:47 left. A fumble left a loss of nine yards; shortly after, Cook was sacked, causing a fourth-and-21. Alto turned the ball over, as Leon milked the clock, winning the game, 30-8.

The Cougars move to 5-2, going 2-1 in district. Alto remains winless, but hopes aren’t over for the amazingly coached team, who hustles and has heart like no other, something they showed Friday night.

In addition to its special ceremony in remembrance of Matthews, the district recognized team members as part of Senior Night ceremonies, in which all seniors were escorted and announced before the game, the last scheduled this season at Cam’ron Matthews Field. 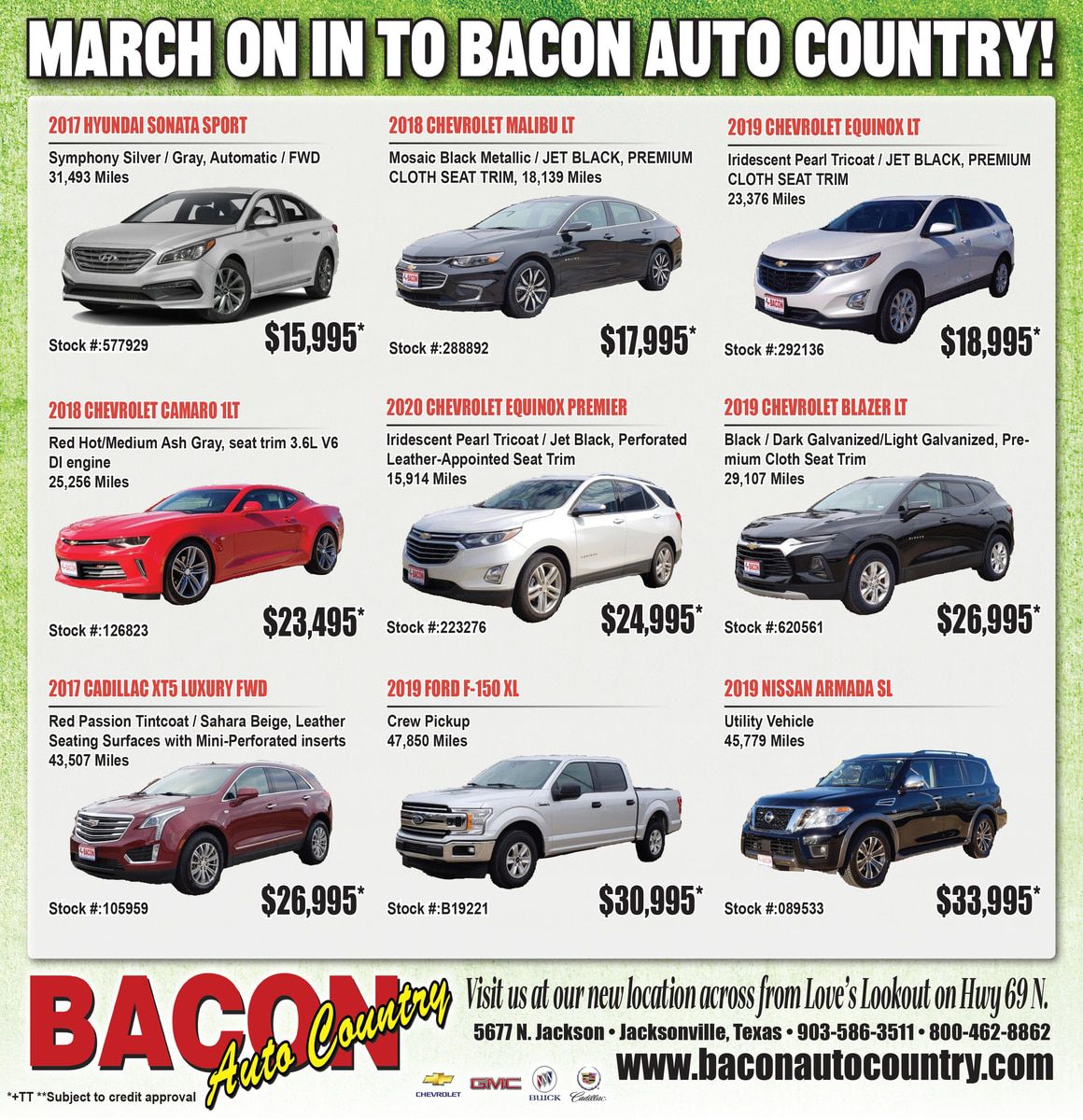