One love, one heart: Alto comes together for day of unity 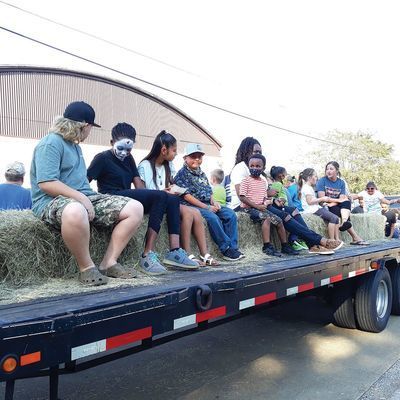 Photo by Jo Anne Embleton Attendees of all ages clamber aboard a trailer at the recent One Love Alto event, waiting for a hayride to begin. The ride was part of an afternoon celebration of unity in the southern Cherokee County City. 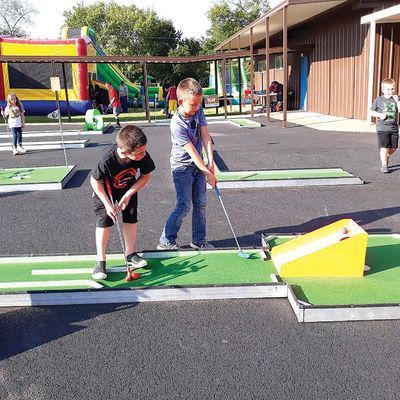 Photo by Jo Anne Embleton Youths try their hand at putt-putt golf, on a course set up at Alto’s Hillside Baptist Church during a recent unity event at the church. 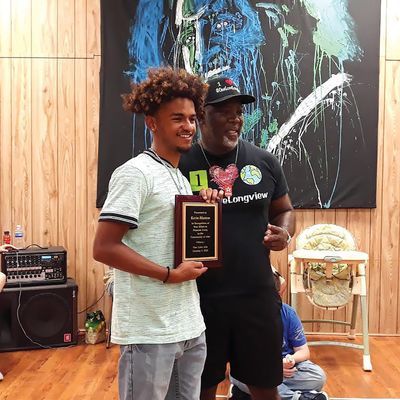 Photo by Jo Anne Embleton Kevin Blanton (left) is presented with a plaque recognizing his efforts to launch One Love Alto, a local event designed to unite residents in a time of racial tension elsewhere throughout the country. With him is Patrick Johnson, co-founder of the One Love Longview movement.
Previous Next

Earlier this month, that bond was strengthened by the launch of One Love Alto, an event that was a marked contrast to the division and strife seen in communities throughout the nation dealing with racial tensions.

Alto High School senior Kevin Blanton, who is the son of Kimberli Pate and Kenneth Blanton, said seeing “disunity in the country” triggered a desire to “try to the best I can to help my community out.”

He sought out Patrick Johnson, a co-founder of One Love Longview, a group whose mission is “to promote unity and oneness across Longview and help bring healing to our community by sparking hope through kindness, goodness and positivity,” according to the group’s Facebook page.

Spurred by Johnson’s encouragement, and backed by Hillside Baptist Church, his home church, the youth said he was greeted with strong support the whole way.

“Alto is a great community,” Blanton said. “They backed me up the second I brought it up, and today, we have a bunch of volunteers out here – it’s great to have them.”

One Love Alto was held at the Alto church Oct. 3, drawing approximately 200 people the first hour. The event featured food, entertainment, games, prizes and a hay ride, just a simple community event that brought families from every background who just wanted to hang out and have fun.

“People want to come out, have a good time and come together,” Blanton agreed, adding that because pandemic precautions meant gathering in small groups, gatherings tended to “focus on one race.”

“I just wanted everyone to come together and have a good time,” he said.

Events like One Love Alto help build community because it’s inclusive, and it builds upon itself, Johnson said. “You go to a whole deeper level of appreciation for one another – for just everyone. Nobody is out here fussing; nobody is out here fighting, it’s just kids playing and having fun.”

He pointed to a rapidly filling hayride, chuckling. “Even I can’t wait to ride that! It’s kind of like the old-fashioned days, when people gathered together, loving one another, (playing) games, just everybody smiling. And that’s more of what we need.”

And that is a goal Blanton has set for One Love Alto.

“I see it building, growing – I don’t just want to make this a one-time thing: I want I want to keep it going, give people a chance to come together as a community, with free food, free drinks and entertainment,” he said.

Johnson has worked with different East Texas communities to help create similar events, but Alto is memorable because it was a high school student – one involved in basketball, baseball, track and who films the football games – who had the vision for One Love Alto.

“I’m just so proud of Kevin for stepping up and doing this,” he said, adding that a community is stronger together “than we are apart.”

“This is what America is all about, this is the American Dream: Living together, working together, our kids go to school together, we play ball together. You have white, Black, Hispanic … when we come together, this is what God wants to see, this is where our strength lies, right here. It doesn’t lie in us being separate,” Johnson said.

Blanton said his goal was “just trying to make a difference, to make a change – I want this to be known,” and that initially, “I was quite nervous when I first put this together because I wasn’t sure how the community would back it up.”

Standing in the church hall, surrounded by attendees who gathered to watch as Johnson presented him a plaque, Blanton said he was “amazed” by the response.

The Editor – Cast a ballot

Get your flu shots!