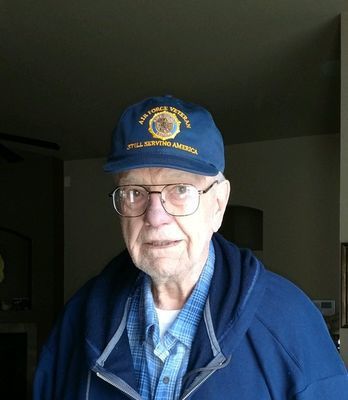 M.D was born on Oct. 10, 1928, in Leonard, Texas, to Mack Dow and Velma Stanley Hinton. After graduating from Rusk High School in Rusk, Texas, he enlisted in the U.S. Army Air Corp in January of 1949, where he served as Security Police and Law Enforcement. He continued his military service in the U.S. Air Force in both the Korean War and in Vietnam before he retired from active duty in July 1971. After his military service, M.D. worked as a correctional officer at the Idaho State Correctional Institution in Boise, Idaho.

M.D. is survived by his loving wife of 67 years, Lawanda Sue Hinton of Mountain Home, Idaho and El Paso, Texas; his daughters, Sharon and her husband, James R. (Jim) Hamilton of Alamogordo, N.M., and Cindy Hinton of Seabrook, Texas; and son, Daryl Hinton of Mountain Home, Idaho. He also leaves behind grandsons, Dr. Steven and his wife Nina Hamilton of El Paso, Texas, and Michael Hinton, U.S. Army SFC who is currently stationed in Germany. He also leaves behind great-granddaughters who were the light of his life, Luciana and Graciela Hamilton, of El Paso, Texas; sister-in-law, Barbara Hinton of Plano, Texas; brother-in-law, Herman Jones and his wife, Fran Ellisor of Conroe, Texas; and several cousins and nieces and nephews.

M.D. proudly served his country at home and abroad, enjoyed travelling to see his children and their families, and loved Idaho, especially the Sawtooth Mountains and, of course, held his native state of Texas close to his heart.

M.D was a member of American Legion, Post 101 in Mountain Home, Idaho.

The family is grateful to the staff at both the Ambrosio Guillen VA Home and Los Palmas Hospital ICU physicians, nurses, and care team who worked tirelessly and risked their own health to be with him throughout his battle with COVID-19.

In lieu of flowers, donations may be made in memory of M.D. Hinton to American Legion, Post 101 715 South Third East, Mountain Home, ID 83647