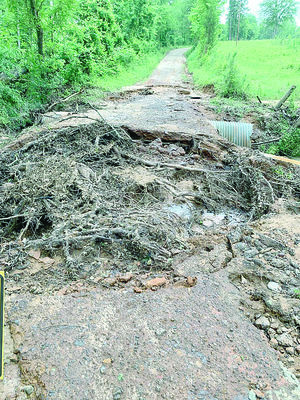 A county road in Precinct 1 sustained heavy damage from flood waters in May. 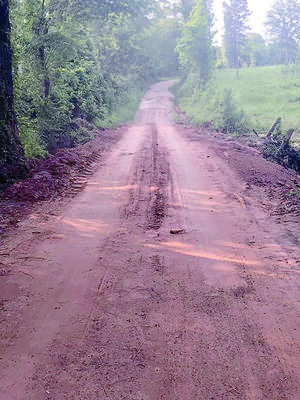 The same county road, after Precinct 1 road crews replaced the culvert and repaired the road surface over the last few weeks. 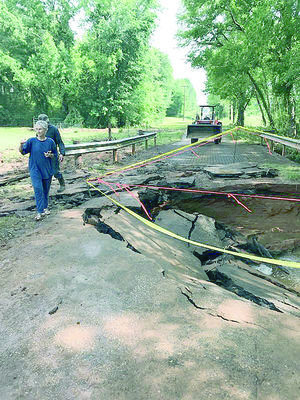 Cherokee County Precinct 2 crewmen did major repairs to a county road recently, after severe weather and flooding destroyed the road’s surface and bridge 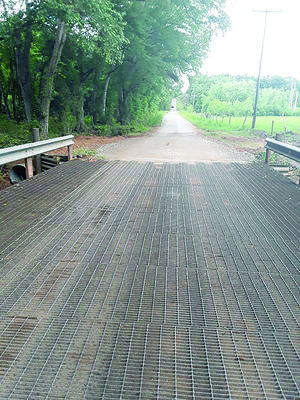 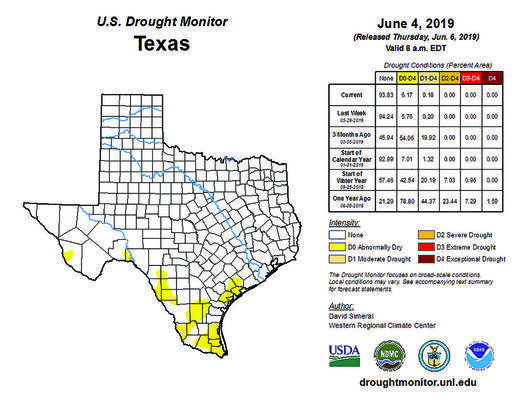 County continues to recover after storms:

Cherokee County officials are reporting the light at the end of the tunnel is getting closer as clean up continues from all the severe weather the area experienced through April and May.

Cherokee County and much of east Texas was inundated with heavy rainfall and tornadoes through the majority of the months of May and April.

Seemingly never-ending rainfall in May caused massive flooding in all four county precincts – washing out roads and bridges, knocking down trees and power lines and damaging homes and businesses.

“Working to repair the roads after the devastating floods,” Traylor stated in his post. “Floods have devastated our county roads. My crew has been working hard to repair them. There is still a lot of damage out there. I want to thank you for your patience as we continue to work as fast as possible to make the repairs. It’s going to take a while to get to them all. Thank you for your understanding.”

Clean-up efforts were hindered further as flood waters washed away the Pct. 1 county barn’s driveway and stock piles of material.

The copious amounts of rainfall also caused problems for several businesses along Main Street and U.S. Highway 84 in Rusk.

Gray’s Automotive shut down for just over a week after One-Eyed Creek flooded his shop on May 18.

“I hated that happened to him so much,” Rusk resident and Flowers N Things flower shop manager Jan Hardy said. “He does a great job on keeping my car and the flower shop’s delivery vehicle going, we sent Jody and his staff some pizzas for lunch. I know it wasn’t much, but we wanted to let them know we were thinking of them.”

May’s rain also served to hamper clean-up efforts in Precinct 2 and the city of Alto from the trio of tornadoes that swept through the southern end of the county on April 13.

Officials with The River church in Alto, which has established the River Alto Relief Fund, have been posting updates on the Fund’s Facebook page.

“Three more homes were placed this week and multiple roofs re-shingled,” the most recent post, shared on Thursday, June 6. “Several pad sites cleaned and built; multiple power poles installed and a variety of plumbing connections made. A special thanks to Steve Cox and Ken Richardson on your invaluable help on these projects! Also thanks to Ann Miller Henley for all of her work, without which this would be overwhelming.”

At least a dozen houses have been set for Alto residents who lost their residences in April’s tornadoes and more are planned.

The River church created the relief fund to help low income and uninsured home owners to repair and return to their homes.

“There’s still a lot of work to be done and without your financial help none of this would be possible,” a post on the church’s Facebook page states. “The River church is still able to match all tax deductible contributions. Thanks all of you who have contributed to help Alto rebuild.”

Anyone interested in contributing to the Relief Fund can give online at www.theriveralto.com or mail your tax deductible contributions to The River Relief Fund, PO Box 416, Alto, TX 75925.

The northern parts of Cherokee County might have been spared April’s tornadic activity but didn’t escape the problems May’s floods brought.

Precinct 3 Commissioner Patrick Reagan reported, said, “We’re going at it as hard and as fast as we can,” Reagan said. “We just get the worst ones first and go to the next ones, just make sure they’re passable then start working on it from there.”

All that excess water flowing through the area wreaked havoc on Jacksonville’s water infrastructure, too, causing a pair of wastewaters lift station to overflow in Jacksonville and several county water supply corporations to have to issue boil water notices to their customers.

Jacksonville city officials reported an unauthorized discharge or spill of wastewater at the city’s lift station on South Bolton Street at Sunnydale Drive May 10-17; and at the Lake Shore Lift Station on May 19 – that one causing officials to close Lake Jacksonville for the duration of spill clean-up. Estimated volume of the spills was greater than 100,000 gallons.

Jacksonville officials notified the TCEQ Regional office, contained the spills and disinfected the immediate areas by end of day Monday, May 20, and issued boil water notices for private well users in the area only. The lake was reopened in time for Memorial Day festivities.

“The city has already begun capital projects to help reduce the impact of rainfall on the sanitary sewer system,” Jacksonville Communications Officer Andrew Lugo said in a statement released in May.

Precinct 4 Commissioner Billy McCutcheon said his crews are anticipated to be finished with bridge repair on Seven Bridge Road and clean up downed trees and other natural debris.

“We’re probably about 75 percent done on clean-up – most of the debris has been picked up, especially in the Reklaw area,” McCutcheon said. “Not all our roads are 100 percent as yet, but we’re anticipating starting to prep for overlay work this week.

“It’s been a lot of long days – there’s a lot on our plate right now. We’re going to keep our noses to the grind stone and get everything addressed as quickly as possible. I want to thank all our residents for their patience and assistance as we get things taken care of.”

Crews of both Cherokee and Rusk counties assisted the city of Reklaw in repairing street damage and replaced washed out culverts. McCutcheon said his staff has finished the Cherokee County side of the city’s street issues.

City crews are still cleaning up downed trees along some streets.

“We had a lot of downed trees, some homes were damaged, some water and natural gas lines broke, but we’re up and running well there and making progress on a lot of other areas,” Reklaw City Secretary Gaylene Tubbe said. “We appreciate our county’s help, too.”

Sure, recent and prolonged heavy rainfall has taken its toll on Cherokee County and the rest of east Texas, look at the silver lining – for the first time in two years, the vast majority of the Lone Star State is not experiencing drought conditions.

The U.S. Drought Monitor, put together by the National Integrated Drought Information System, states as of Thursday, June 6 – the most recent data released -- only .2 percent or 20,000 Texans in the southwestern portions of the state are currently living in moderate drought conditions and about 6 percent of the state’s population is experiencing abnormally dry areas.

“For two weeks in a row in May, drought maps showed no drought in Texas,” a statement from the Texas Water Development Board (TWDB) reported. “Abnormally dry or worse conditions shrank to less than half a percent of the state in May, the lowest values for this parameter since May 2005.”

The TWDB reports rainfall is the primary source influencing water conditions in Texas.

Out of 118 reservoirs in the state, total regionally-combined conservation storage was at or above-normal in East Texas (98.5 percent full). Both Lakes Jacksonville and Palestine are reported to be at full capacity.

According to data from the Texas A&M Forest Service, as of June 6, 44 of Texas’ 254 counties were under a burn ban – none of which are in east Texas.

Remembering those who served

Rusk Yard of the Month

Spooktacular delights in store this week for Ha...